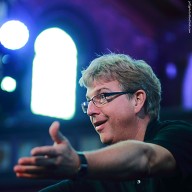 Scott Stroman is a conductor, composer, trombonist and singer in a uniquely broad range of musical styles, from jazz to classical, contemporary, and world music.

A native of the USA based in London since 1982, he founded EV in 1991 and is director of the London Jazz Orchestra, artistic director of Highbury Opera Theatre, Director of Music at the American International Church, and a professor at the Guildhall School of Music and Drama where he developed and directed their world-class jazz programme.

He created and directed the London Philharmonic Orchestra's innovative cross-genre Renga ensemble, was conductor of the LPO's Future First and Hit Squad ensembles, and works with orchestras, choirs, opera companies and jazz groups throughout the UK and Europe.

His numerous compositions include choral song cycles, jazz orchestra suites, orchestral music, stage musical works Fever Pitch the Opera, As You Like It and Fables, and numerous shorter compositions, tunes and songs. He is currently writing an opera based on Michael Palin’s play The Weekend.

In addition to his work at the Guildhall School, Stroman has led hundreds of workshops in singing, conducting, improvisation and performance throughout the UK and Europe.

He often conducts youth orchestras, choirs and bands and was conductor of both the London Philharmonic Youth Orchestra and the Northern Sinfonia's Young Sinfonia.

Sign up for our email newsletter to receive the latest news and event postings.